Nation, I had the opportunity to sit down briefly with mayoral hopeful and MLA for Calgary-Buffalo Kent Hehr in advance of his fundraiser last night at Lord Nelson's Pub.
The fundraiser itself was well-attended, and spirits were high. Hehr gave a brief speech, followed by an Elvis who looked suspiciously like a former head of the Public Teachers' Union, and then a local band starting rocking the joint - which was my cue to leave (the band was good, but I had other commitments).
We had a chance to talk about Hehr's vision for the city, transparency, public safety, sandwiches, and a bunch of other stuff as well.  Take a listen!
Note 1: There was music playing in the background, which I've tried to filter out somewhat in the "audio cleaning" process.  You will, however, still hear the background noise. It IS a pub, after all. :)
Note 2: The interview was being conducted in full view of everyone who walked in, so at several points you'll hear people come over and try to talk to Kent, a server come by with some nice cold Diet Cokes, etc.  I've kept these in the audio as part of my commitment to provide you, the members of the E.S. Nation, with unfiltered content.
Note 3: Kent drops the "s" bomb 4 times in this interview, by my count (think "shoot", but without the kids around).  Unless you're the type of person who hits their thumb with a hammer and thinks "fiddlesticks", you're probably not going to be offended.  But, be forewarned.


Note 4: At one point in the evening, a campaign volunteer asked if I was Rick Bell.  I responded in the negative, then promptly ran to Shoppers Drug Mart for Rogaine and exfoliating face scrub.
(This has been cross-posted to CalgaryPolitics.com)
Posted by Enlightened Savage at 11:04 a.m. 3 comments 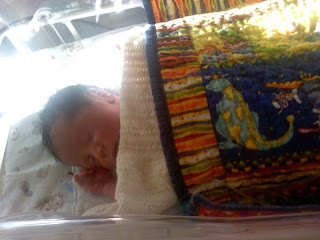 Nation, I try to avoid schmaltz whenever I can.  Generally, I fail miserably.  I'm just a sensitive guy.
This week saw the birth of my first nephew.  He was 6 weeks early, but is doing exceptionally well, thanks to the tireless efforts of the staff of professionals at the Rockyview General Hospital.  He'll be going home with mommy and daddy any day now.
Sitting in the neo-natal ICU, looking down at this tiny, little person, makes one acutely aware of how fragile life is.  How careful we have to be with the things that matter the most.
Little Felix is going to have a great upbringing - his parents are great, his big sister is already fiercely proud of him even though she can't hold him yet, and both mom & dad come from close-knit families.  The question then becomes: What sort of a society will he grow up into? Will it be just? Safe? Warm and embracing of diversity, or cold and lonely?
I am more committed than ever before to help shape the world that he grows up in.  I HAVE to do it, because I'm in the position to DO so - and those with the opportunity to effect positive change who choose instead to squander that opportunity are tools of mediocrity.  I'm going to run for office.  I'm going to appeal to people's greater selves. I'm going to listen to the best ideas, regardless of whether or not they come from "opponents". And I'm going to help build a better world for Felix, the same way people like Peter Lougheed and Grant Notley helped millions of Albertans build a better world for Felix's father - my kid brother.
I owe Felix nothing less.
- Uncle E.S.
Posted by Enlightened Savage at 3:17 p.m. 1 comments

Nation, I had a chance on Tuesday evening to sit down and speak with Ward 11 candidate Ernest McCutcheon over some delicious blueberry cobbler and Grizzly Paw Root Beer.  Ernest has previously been interviewed by my fellow CalgaryPolitics.com contributor, and my personal Padawan Learner, Shane over at calgaryrants (do you have your tickets for the bowling fundraiser yet?).

While the conversation went on until MUCH later than anticipated, the recorded interview itself lasted a shade over 30 minutes - once I figured out how to turn the recorder on (insert your own wisecrack here).

This is the 2nd interview I've conducted for Ward 11's Aldermanic race.  I've also heard from the third challenger and will be setting something up with him soon, which leaves just the incumbent.  Brian - your move. I'm not hard to find. ;)


(This has been cross-posted to CalgaryPolitics.com)
Posted by Enlightened Savage at 12:32 p.m. 0 comments

Nation, it was back to the grind for your humble scribe as I sat down last night for a good talk with Ward 14 Aldermanic candidate Shawn Kao.

As with previous candidate interviews, much of the first portion of our discussion was getting background for my later candidate profile of Shawn.  He consented to being recorded for posting to this blog, and the result is posted below, in all its "recorded on an iPhone using the Voice Memos app" glory.


(This has been cross-posted to CalgaryPolitics.com)
Posted by Enlightened Savage at 1:20 p.m. 1 comments

Nation, last night was a good night to be the Enlightened Savage.

I kicked it off with an all-too-brief appearance at the Calgary Tweet-Up (shout outs to @prairies and @theRoundhouse), and I was then pulled away so that I could have the pleasure of sitting down over a Coke Zero (this diet is going to kill me!) with James Maxim, candidate for Alderman in Ward 11.  We had a great chat, a lot of which is going to make it into my later "candidate profile" post for Mr. Maxim, and he also kindly agreed to be interviewed on-the-record.

The following is the entire interview, with no edits save the deletion of the first 30 seconds of audio which included such gems from your humble scribe as "HOW DO I WORK MY iPHONE?" and "THANK GOODNESS FOR AUDIO EDITING SOFTWARE!"

(This has been cross-posted to CalgaryPolitics.com)
Posted by Enlightened Savage at 1:41 p.m. 1 comments

Andrew Rodych to run for Alderman in Ward 13

Nation, as part of my duties as one of the charter members of CalgaryPolitics.com and The Best Political Team in the Blogosphere (TM), I'll be covering the aldermanic race in Ward 13.

I received a press release last night from the campaign to elect Andrew Rodych as Alderman for Ward 13.  I have never met Mr. Rodych, and had not heard of him until last night, but I commend him for his decision to put his name on a ballot in an effort to improve his community.  Well done, sir!

A quick google search for Rodych yields the information that he's at least partially crazy, as he plays goal in a recreational ball-hockey league.  I've seen how some of those rec. league guys slap that ball - you've GOT to be crazy to play goalie.

On a more serious note, though - rather than running with platitudes and pretty words hiding a lack of substantive proposals, as many candidates across the city seem to be, the very first press release from Rodych outlines his plan to bring forward what he's calling a "Community Characteristic Bylaw", so as to protect in perpetuity those areas that are most valued by a community - parks, golf courses, green spaces, recreation centres, lakes, et cetera.

The result of a place being designated as a "Community Characteristic", under Rodych's proposal, is that the city could not re-zone the area later - a situation that hits close to home for many in Ward 13, in light of the ongoing battle over the proposed redevelopment of Shawnee Slopes Golf Course into housing.

The Community Characteristic Bylaw is part of the "Communities First" plank of the Rodych campaign.  The others are "Smart Planning", and "Real Representation".

A quick perusal of the Rodych website shows a surprisingly rare feature - a discussion board.  This is a feature that most campaigns in this election, for whatever reason, haven't included on their own websites.  Showing a willingness to converse publicly with the electorate, while regrettably rare, is certainly a quality for which I give Andrew full marks.

Andrew Rodych will officially announce his candidacy on August 9th.  You can find more information about Andrew, and his policies, on his website at andrew2010.ca

(This post has been cross-posted to CalgaryPolitics.com)
Posted by Enlightened Savage at 11:49 a.m. 1 comments

Mixing things up a bit with the template, Nation. Let me know what you think.