As news first trickled in, and then came as a torrent, about the bombings in Boston yesterday, my thoughts naturally turned to the morning of September 11th.

Not to the horror of those minutes and hours. And not to the feelings of fear or helplessness that I felt on that day as I watched my nice, safe, innocent naïveté disappear in clouds of fire, smoke and dust.

No, my thoughts yesterday turned to the people of the greater Boston area. In the aftermath of September 11th, the whole world saw the resilience of the people of New York as they dug out from the rubble and reclaimed their way of life. They heard the inspirational stories of New York's Finest, and New York's Bravest, and thousands of New Yorkers pulling together to make it through the dark days that followed the attacks.

One of the most touching things about that recovery was, to me, the way the people of Boston reached out and threw everything they had into helping their New York cousins. The rivalry between New York and Boston is legendary - but when New York most needed help, it was the people of Boston who jumped to their aid, without question or hesitation. "The Yankees still suck. What do you need?"

The men and women of Boston and of Massachusetts are the descendants of people who looked down the barrel of the greatest military power in the world and said "Bring it on, you're not holding us down." They took up arms against the imperial might of Great Britain, led a revolution, and won their freedom.

Cowards with gym bags and pressure cookers full of shrapnel can't hold down the people of Boston. The full weight of King George's army couldn't keep them down - and neither will this.

They'll stand up, and will keep fighting. Boston always does. They don't know how to quit, and they never have.

EDIT, 4 pm: The New York Yankees posted this photo of Yankee Stadium on Facebook earlier. Clearly, the people of New York remember how Boston helped them in their hour of need better than I. That's family: You don't always like each other, and you fight like hell - but you're still family. 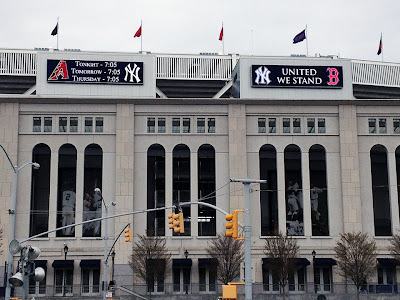