Put Your Money Where My Mouth Is...

Nation, back in late 2012 a few of us Alberta political blogger-types threw together a taco eating contest for charity, which we dubbed "#ablegcares". Through the pledges we collected from our respective party supporters, as well as an anonymous donor who matched every donation dollar-for-dollar, we raised in the neighbourhood of $10,000 for Inn From The Cold, a Calgary charity whose mission is "To provide emergency shelter, support and programs to homeless children, their families and others in need, with the goal of building healthy, stable families and ending homelessness."

My friend Shane Byciuk of Calgary Rants has taken up the mantle of organizing the event this year, and he has broadened the scope to include not just politicos of every stripe, but also representatives of Calgary/s non-political social media folk, including my wingman Cory Chapdelaine, podcaster Kevin Olenick, and stomach-with-legs Kyle "the Pancake Breakfast Guy" MacQuarrie.

The food being eaten this year has changed as well, as a reflection of Alberta's rich eastern European history. Our intrepid eaters will be chowing down on... well, there are about a hundred spellings, but I'm going with "pyrogy". If that's at all unclear, they look like this: 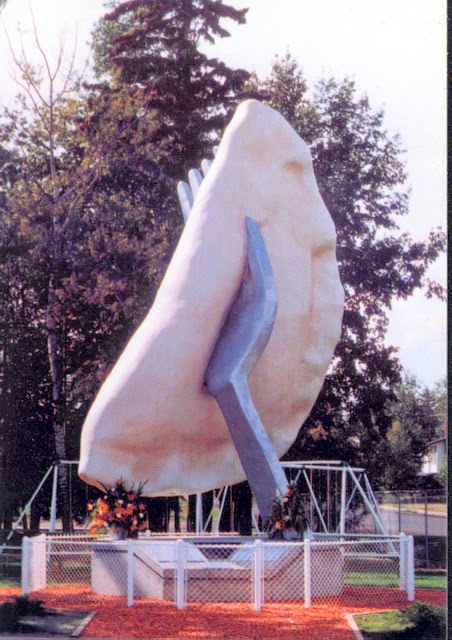 (actual pyrogy being consumed may be smaller than the one in the photo)
... and they're delicious.

Here's where we need your help:

The entire concept of this fundraiser is simplicity itself: You choose an eater to support (might I suggest Joey Oberhoffner?) and pledge an amount per pyrogy (50 cents? A buck or two?) or a flat, straight donation (any amount helps). Challenge your friends to do the same, with the eater of THEIR choice. What makes it fun is that you can toss good-natured jibes at your friends who support other political parties, while watching some of us plow through plates of pyrogy, knowing it's all in good fun and going to a TERRIFIC cause. $600 raised enables Inn From The Cold to provide a meaningful and safe Christmas to a family of four who would otherwise be, literally, out in the cold.

HOW DO I HELP?

Go to this link, and pledge your support. Check back often, and if you see your eater of choice falling behind, see if you can help them out. Spread the word via social media, too - there are links right on the page. It ultimately doesn't matter which political party wins bragging rights for the year, or which eater gets to take home the coveted "Golden Perogy" trophy (yes, seriously) - all that matters is that we're raising as much money as possible to support families who have next to nothing.

As of press time, pledges to your humble scribe's efforts include $300 straight donation (just for showing up), as well as $31 per pyrogy eaten, which puts me in fourth place behind Marc Doll of the Alberta Party, Vincent St. Pierre of the Alberta Liberals, and Derrick Jacobson of the Wildrose Party. My goal is to sit down next Wednesday night with NO LESS THAN $100 PER PYROGY pledged for my efforts. I know my fellow PC's won't let the cause down.

For details on the event, which is open to all and will be "live tweeted", check out Shane's blog over at Calgary Rants.

Nation, the Wildrose came out today with a plan to improve accountability and transparency in government. There's a lot of good stuff in there - which I'll leave some of their much-ballyhooed "100 bloggers" to expound upon.

I want to talk about the crown jewel of the proposal, though: Recall Legislation.

Wildrose proposes that they would legislate that if 20% of a constituency's electorate were to sign a petition within a 3-month span, the constituency's MLA would be recalled, forcing a by-election.

This is, to put it plainly, a gawdawful idea, based on a solid principle.

The principle is "the people should be able to fire their MLA if they go off the rails in between elections". It's a good principle. The problem with recall legislation is always "where do you set the bar?". If you set the threshold too high, it will NEVER happen, thus negating any possibility of actually recalling anyone, rendering the law moot. If you set it too LOW,  you can end up in a state of "perpetual recall", where voters unhappy with the result of their most recent election can force by-elections over and over, in perpetuity. Unless you add to the law that a constituency can only do this once in between elections - which takes away the right of the voter to fire their representative mid-term...  and so on and so forth. It becomes a vicious cycle, with each by-election costing over $100,000 in taxpayer dollars.

The Wildrose proposal is that the bar be set at 20% of the eligible voters in a constituency. For most of Alberta, that means a little under 7,000 voters signing the petition. It wouldn't matter how many of the remaining 28,000 voters (on average) were happy or indifferent.

So let's say you just ran a hard campaign in a suburban Edmonton riding, and the winner got 5,000 votes, compared to your candidate's 4,800 and the third-place party's 4,200. You know the party that won spent every dime they had, but you and the third-place finisher still have cash, and a group of hungry and motivated volunteers who believe they can make up the gap. If you can get together with the third-place candidate over a beer and agree that either of you would be better than the jerk who won, you can track down your voters, get them to sign on the dotted line, and send people right back to the polls. In some cases, in a different riding, all you'd need is your OWN voters to sign in order to break that 20% threshold.

Using the 2012 Alberta General Election results as a guide, under the 20% rule, 6 MLA's could have been recalled and forced to step down or run another campaign, based only on the signatures of people who voted for the 2nd-place finisher. This would have been the case in Highwood, where John Barlow's voters could have recalled Danielle Smith the day after the election, were this rule in place. Another FIFTY-FOUR MLA's could have been recalled if a combination of their opponent's voters got together and signed the petition, unhappy with the election's result.

That's 60. Sixty out of Alberta's 87 MLA's could have been recalled, even if they hadn't done anything wrong besides "winning instead of my preferred candidate". And this is just assuming that the old adage "decisions are made by those who show up" holds true, and we're only courting people who cared enough to vote in the General Election for their signatures. If you were to go after non-voters it gets even easier to hit the magic 20% threshold, though non-voters would likely only start to care if the person who won election actually DID start to go off the rails.

I'm a big fan of democratic reform that makes sense. Our elected officials need to be held accountable to the people who elect them, and "once every four years" might have been practical in the horse-and-buggy days, but things move fast in the 21st century. Remember the 77% approval rating Alison Redford got from her own party only a year ago? It'd probably be a little lower these days.

What I DON'T want to see, though, is MLA's so consumed with the fear of being recalled that they're unable to do their jobs. Skipping QP to spend extra time in their constituency because someone with an axe to grind is handing out a petition. Voting exclusively along the lines of popular opinion in their constituency with no regard for the ROB (Rest Of Alberta), because if they support a policy that benefits all Albertans but is locally unpopular they could be out of a job. In a constant state of fundraising, fearing that they need 2 elections worth of money in the bank at any one time just in case.

This is how the American system, with its recalls and Primary races, turns well-intentioned candidates into little more than fundraising machines after the election, taking calls from lobbyists and "issue-focused donors" all day, spitting out votes and speeches designed purely to hold off challenges to their office, rather than focusing on governing in the best interests of all. A party or interest group with 7,000 names on a contact list and bags and bags of money could conceivably tie up an MLA they consider a "problem" for YEARS with repeated recalls, until that MLA either quit out of exhaustion, or ran out of money to fight the by-elections.

But if every second you're in office you're in fear of losing your seat if you stand your ground on a righteous but locally contentious issue - or, for that matter, just an issue a well-organized lobby group has a vested interest in - how free a vote IS it, really?
Posted by Enlightened Savage at 11:55 a.m. 0 comments