Things That Make Me Go "Hmmmmmm"... 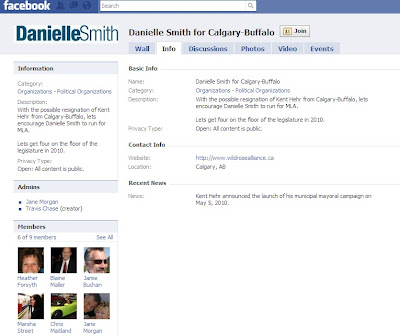 Now, of course we knew the WAP would have to come up with a candidate for a possible by-election should Hehr be successful in his bid for the Mayor's chair... but most Poli-watchers were under the strong impression that Danielle would only consider Calgary-North Hill, her home riding, for her first run as MLA.


If there's fire behind this group's smoke - does that lend some credence to other rumours that had Smith running in a Calgary-Fish Creek by-election should the incumbent step down, as has been theorized since the floor-crossing at the beginning of the year?

Who knows with this group? It would not surprise me if someone who "we wont mention by name" really is in fact Danielle Smith. It could just be special effects. Nothing surprises me anymore!

Now ES, I don't think I have ever heard Danielle say that Calgary North Hill is the "only" constituency she would consider.

In fact quite the opposite, she is open to others that might be a good fit.

Here is a specific quote:

"I'd like to run in my home riding of Calgary-North Hill. That's where I'd prefer. I'd consider the bi-election option depending on the location."

Jane: Thanks for the heads-up. Hadn't seen the quote before. I know the WAP had a STELLAR candidate in North Hill in 2008... wondered if she might be giving it another go... ;)

No, that candidates' campaigning days are over; at least so far as running for MLA. ;)

She is quite happy working her business and unlike other candidates, isn't able to get paid while campaiging...LOL