Savage On The Scene: The Night Before #abpleader

Nation, the Savage has landed in Edmonton, and arrived at the Shaw Convention Centre just as the formal program was wrapping up and leadership candidates were making the rounds, kissing the babies (figuratively) and the dogs (literally - there WERE 2 dogs here). 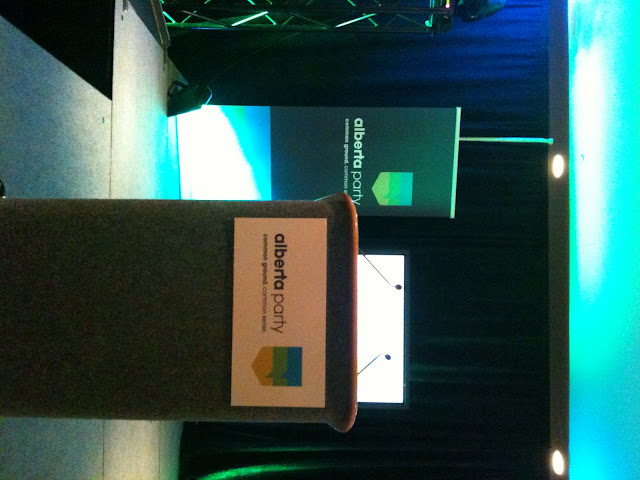 By this time tomorrow, a party leader will be standing here.

I've touched base with the Maloney, Taylor and Easton camps. The candidates have speeches to polish - they've got over 15minutes at the podium tomorrow to convince the voters why they're the right fit for the job. The supporters seem to be bundles of energy, ready to go off and do... something... at a moment's notice. WHAT, exactly, they're supposed to be doing, they're not so sure about.

Cue the Operatives... every party has them. They know your name, even though you've never seen them in your life. You see them smiling at odd times, and then notice the backlight from their cell phone is still glowing in their hand, showing the text message from the manager of their volunteer phone bank. They shake hands with potential supporters, chit-chat for a minute or two, and then grab a campaign volunteer to "work on" you while they power-walk off to put out the most recent fire.

Even for a party that's trying to get rid of "politics as usual", the Operatives have a place. A political party without Operatives is utterly incapable of waging electoral battle. And the Operatives are in for a late night tonight, I think.

Those of you here in Edmonton who might need to get ahold of me tonight, know how to. I'm at the Mariott. ;)
Posted by Enlightened Savage at 10:27 p.m.