Filed under “Things You Probably Don’t Want To Get Wrong”…

"There’s been a misconception that I have already made an announcement regarding our Muncipal Election, and that is incorrect…"

Well. Except for that time on February 27th. 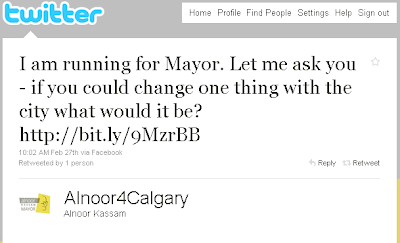 (credit to Kirk Schmidt for the find)

In fairness, here’s the speech Alnoor gave at his SECOND announcement (but his first “official announcement”, I guess) of his candidacy for Mayor, on June 28th:

Good morning and welcome. I’m glad you were all able to attend this morning. And I hope you enjoyed the Alnoor cakes that were sent to you Friday morning! (I believe Chris already guessed…)

I’ll take a few minutes with prepared comments and then answer your questions. We will be done in about a half hour.

First and foremost, I’d like to announce that after much consideration I have decided to run for Mayor of Calgary.

There’s been a misconception that I have already made an announcement regarding our Muncipal Election, and that is incorrect, I have been seriously considering it for the past 3 months, but today I am officially announcing my decision.

Why am I running?

I’ve been talking to Calgarians a lot over the past few months and they have told me they want:

Recently we fired our city auditor because we didn’t want to hear what she had to say. I am a Chartered Accountant by profession, and I know that there’s something wrong at city hall.

We can’t have contracts for $250 million ending up costing us $1.25 billion! We have to clear it up. And that’s not the only issue – it follows the controversy about the Peace Bridge. Where we spent over $25 million and still do not know what the final cost will be!

We Calgarians can sense when people are just being political and misleading us; we can tell when someone is not telling us the truth, we just know there’s something wrong.

It’s time for City Hall to be completely transparent.

Like many of you I’ve come to Calgary by choice and have made it my home. I love the people and I’m passionate about this city. Calgary is the most important city in Canada. Many of you share the same sentiments – we are here on this Monday morning because we all care about this city and its future. It’s time we Calgarians take our Proper place on the National stage.

Our Calgary is a world-class city, where it’s easy to do business and where communities matter.

Over the past few years, many things have changed in Calgary:

What Calgarians are telling me

City Hall should serve every Calgarian.

Calgary is a dynamic city!

I’m running to Serve and represent all Calgarians.

Calgarians have told me we need a leader who:

■Has Entrepreneurial skills and an entrepreneurial spirit,
■Understands how to work with unionized employees
■And who understands the issues of downtown as well as the NE, SE, SW, and NW. All the quadrants of our city are important.

What Calgarians are asking for

Calgarians are telling me we need a leader who has world experience.

Calgarians want a leader who knows how to balance the books, just like a household. We can’t spend more than we earn.

No one has got a pay raise because we’re in a recession, but the city has asked more from us. We have been asked to pay 7% more next year.

We Calgarians had enough, let’s take back our city.

Thank you very much for attending our conference this morning. (I appreciate all the work you do and the coverage you offer our city. I look forward to speaking with you over then next 4 months!)

I haven’t had the time to “fact-check” the whole thing… but in the 4th paragraph, he makes a statement that is not correct. As for the rest? You be the judge.

But Twitter DOES count, candidates. It’s a 140-character flyer that goes out to millions of people, and stays around forever.

(cross-posted to CalgaryPolitics.com)
Posted by Enlightened Savage at 2:50 p.m.

At least the Official ( or was it) press release had a cool colouring page of Alnoor's face.