The Problem With The Calgary Flames 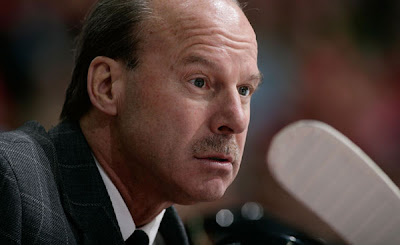 I wrote this post this morning. It looks like an appropriate time to post it, with the Flames behind 5-2 going into the third. Hell, even if they come back to win tonight, it's appropriate.
Consistency. It's the key to winning hockey games. Consistently play from shift to shift, period to period, game to game. It's the one thing you have to have to win - and it's the one thing the Calgary Flames have lacked all season.

They'll play a garbage first period, but a brilliant 2nd and 3rd. They'll play fantastic hockey on Saturday, and then crap the bed on Monday. Fans and players are at a loss to explain it. In fact, there's only one person who NEEDS to be able to explain it: The man who gets paid to make sure they have it - Mike Keenan.

Mike has no idea how to explain it. Which is unfortunate - since it's his job.

All season long, Keenan has been at a loss to explain the lack of consistency. He's been quoted saying things like:
"I can't explain it."
"I don't know why."
"It's hard to explain."
"We're at a loss."

Well, Mike, here's the thing: You were hired to be the Flames coach on the heels of a first-round exit during last year's playoffs. You were brought it to coach a team that had played brilliant hockey at home, but couldn't play well on the road. In short, they were lacking in consistency. So they brought you in, as the third coach in 3 years. To bring some consistency, put them over the top, and take them to the Stanley Cup.

I don't think you're going to do it.

Kiprusoff is one of the best, if not THE best, goalies on the planet Earth. Dion Phaneuf, as I write this, has just been nominated as a finalist for the Norris Trophy - in his third year in the NHL. Jarome Iginla is the best all-around hockey player in the world. Regehr, Langkow, Huselius, Tanguay - these are all top line (or at the very least top 6) talents on every team in the NHL. The Flames are an incredible team on paper.

If they aren't an incredible team on the ice, then the blame falls on one man. The coach.

Mike Keenan is the problem with the Calgary Flames. And until they find someone who can "explain the problem", and FIX it, this phenomenally talented team will ALWAYS be hit-and-miss. But while they should be competing for Stanley Cups, they'll be clawing to get into the playoffs, and then clawing to advance.

And that's a shame.

Even to this Oilers fan.
Posted by Enlightened Savage at 9:44 p.m.

When Playfair was fired (and subsequently rehired as an assistant coach), I told anyone who would listen that it was a huge mistake. He was a rookie head coach and given time he could "right the ship". It's not that I don't like Keenan. In fact, I'm a big fan of "Iron" Mike so it had nothing to do with him. Frankly, I didn't feel it was coaching that let the team down in 06/07 nor do I feel it was the problem this year either. Asides from Kipper, Iginla, and Phaneuf, not one player in that locker room can look at themself and say that they consistantly helped the team throughout the entire season. Until the Flames' acquire players who are hungry to win EVERY game, this team will always be a paper champion.