Nation, typos happen. We've all zigged linguistically or mathematically when we should have zagged.

When politicians do it, however, it's a bit more of a problem. Because, quite simply put, we don't know whether or not we can trust a lot of them. They're up there with lawyers and used car salesmen in our public esteem, as "people who very probably would lie to my face if it would help them earn money/win". So, when a politician gets something wrong, we don't know if it's because they honestly made a mistake, or because they're trying to intentionally mislead us.

This problem reared its head this week when Wildrose Party candidate Richard Jones, of Calgary-Acadia (nee Egmont), posted the following on his Facebook page (click on image to enlarge): 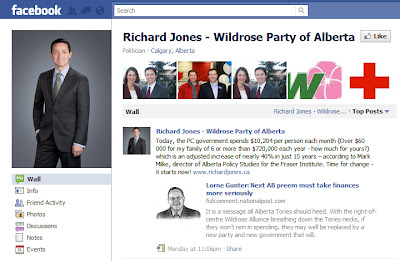 Now, Jones' indignance - which is quite possibly linked to his future career prospects, let's remember - is based on the absolutely brutal statistic that he gleaned from the National Post column listed underneath his comment. In said column, Lorne Gunter quotes a report from the Fraser Institute in which the "$10,204 per capita" number appears.

The gist of the column - and the report - is that Alberta has a spending problem. Spending has increased nearly 40%, adjusting for inflation, since the Golden Age of King Ralph in 1996. That's certainly a discussion I'd be happy to have with anyone. But there's something about the figure that Richard quoted that just seems...  off.

"Today, the PC Government spends $10,204 per person each month"... and he's obviously committed to that number, because he then extrapolates that, for his family of 6, that works out to over $720,000 per year. A solid and meaningful number. Those Tories must be out of control. I mean, let's extrapolate that number further, and see what those PC jerks are spending in TOTAL each year!

That means the Tories are spending...

No wonder Richard's so angry...  Now *I'M* angry, too!  Let's get rid of those free-spending morons!

Of course, a look at the budget would tell you that Richard's math is off, by a bit. $402 Billion, to be exact. Which is a lot of money. It's about 17 months worth of total FEDERAL spending, actually.

In fairness, it could be that Richard simply misunderstood the figure he was looking at. In particular, this could be true if he took Lorne's word for it and didn't actually read the Fraser Institute report which Lorne linked to from his column (it can be found here). Page 28, Figure 5. The truth is, the Government of Alberta spends $10,204 PER YEAR per capita, not "per month", as Richard asserted. The total amount that Ed Stelmach spends on Richard's family of 6 is $61,224 each year, over $33,000 of which is for those silly frills "health care" and "public education".

I'm trying to give Richard the benefit of the doubt here, because if he DID understand the true figure, the only other conclusion we could come to is that he was intentionally misleading us. Which, of course, I'd never accuse him of. In fact, I'd be happy to post his clarification in this space.

Albertans need to have a serious, open and frank discussion about taxes and about spending. These are adult conversations, requiring the utmost care and detail because they affect so many people in so many serious ways. We owe it to ourselves, to our fellow Albertans, and to future generations to get it RIGHT, rather than to throw soundbytes and factoids at each other to try and "beat the other guys".

Is spending "out of control"? I don't think so. I think it's higher than it should be. I think we're making up for the deplorable lack of program and infrastructure spending in the mid-90's for the most part, but there's also fat to be cut, and inefficiencies to address.

But let's do it with the real facts on the table, and calculators in hand.

Like grown-ups - neighbours, friends - trying to make the province better.

Our next generation deserves better than that.
Posted by Enlightened Savage at 1:10 p.m.

I'd expect a lot better from an experienced criminal lawyer like Richard Jones.

Can't blame one of the sacrifices for floating the balloon line and verse as instructed. Becoming common practice with WRP. Very Karl Rove.

These guys think they can run the province? Next time get better candidates, not like Richard Jones. What a clown.

I'm glad you posted this too show How much the PC's is spending! I had no idea was $10000 is almost half of what I make. I think it's disgusting any way you look at it. Thx.

The only change we need is in the opposition. The Wildrose are pitiful! Time for change!

It's beyond remarkable how the Wildrose Party expects to be taken seriously with idiots like Richard Jones who can't even carry the 1.

Thanks Anonymouses (Anonymi?) for your thoughts. I appreciate your passion, however please DO try to keep it civil. As I said, any of us could have made the mistake, and I'd be happy to post Richard's clarification in this space - I'm not hard to find, Richard. :)

After all - if we're throwing around incorrect figures in an attempt to score political points, we SHOULD be honourable enough to admit when they're proven wrong... right?