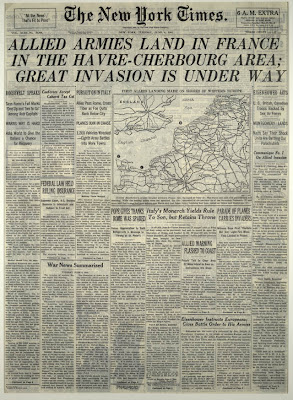 65 years ago today, on June 6th, 1944, thousands upon thousands of young men threw themselves into the meat grinder of the Atlantic Wall in an attempt to breach the impregnable Fortress Europe of Hitler's Nazis.
It wasn't glorious. It wasn't exciting. It wasn't the sanitary, shiny stuff we see in most hollywood depictions of war. It was brutal. Death and horrifying dismemberment were everywhere. The worst kind of hell could be found on the beaches of Normandy that day.
To the men who left their friends, their brothers, and parts of themselves on those beaches - we owe you an immeasurable and irreconcilable debt. How can you repay a man for 23,741 nightmare-filled nights? For 23,741 evenings when they laid down to sleep knowing that they were about to experience the horror yet again?
You can start with a thank-you.
Thank-you.
Posted by Enlightened Savage at 10:07 a.m.

Amen. Kinda makes my obligatory trip to 'battle' the crowds at Home Depot this morn' pale in comparison. We, as a society, don't realize how easy we've got it. Pity.